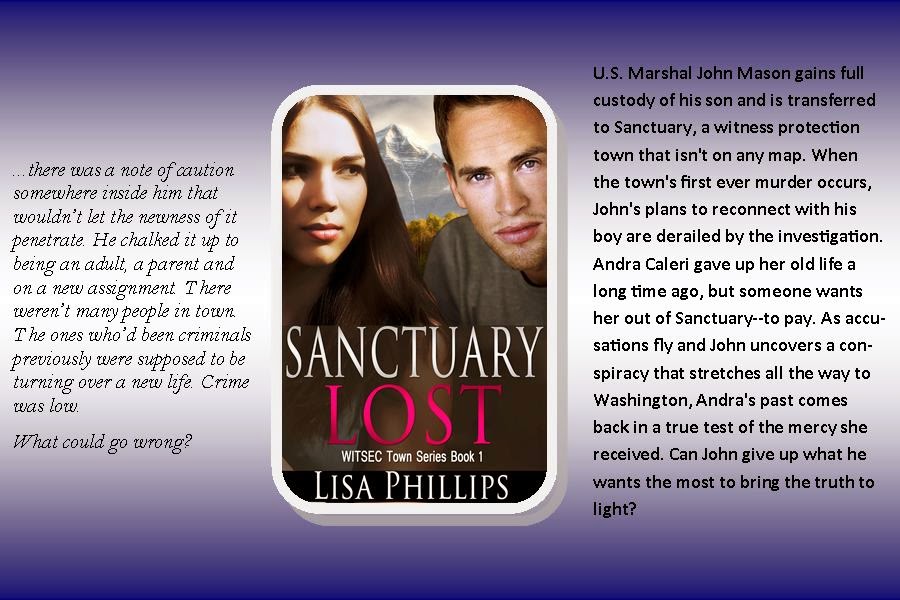 Enter now to win an e-copy for either
Kindle or Nook...

All you have to do is leave a comment! The first four people to leave their email AND Kindle/Nook will get a free copy!

It's RELEASE WEEK here at authorlisaphillips.com!

I'm giving away another FOUR ebook copies of SANCTUARY LOST to the first four people to comment.
Leave me your email in this format: lisaphillipsbks at gmail dot com (because we all hate that phishing spam) and whether you need Kindle or Nook... 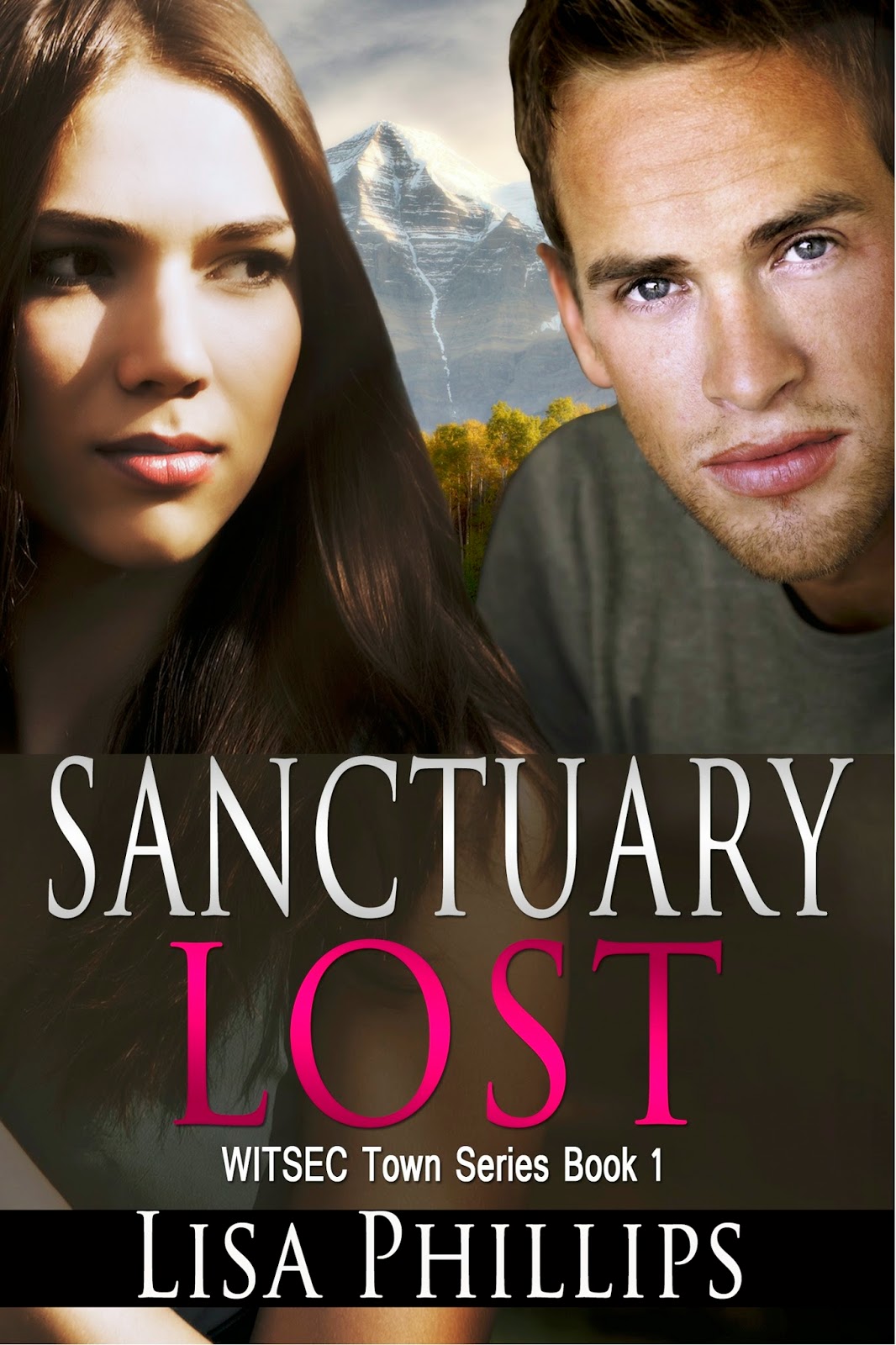 U.S. Marshal John Mason gains full custody of his son and is transferred to Sanctuary, a witness protection town that isn't on any map. When the town's first ever murder occurs, John's plans to reconnect with his boy are derailed by the investigation. Andra Caleri gave up her old life a long time ago, but someone wants her out of Sanctuary--to pay. As accusations fly and John uncovers a conspiracy that stretches all the way to Washington, Andra's past comes back in a true test of the mercy she received. Can John give up what he wants the most to bring the truth to light? 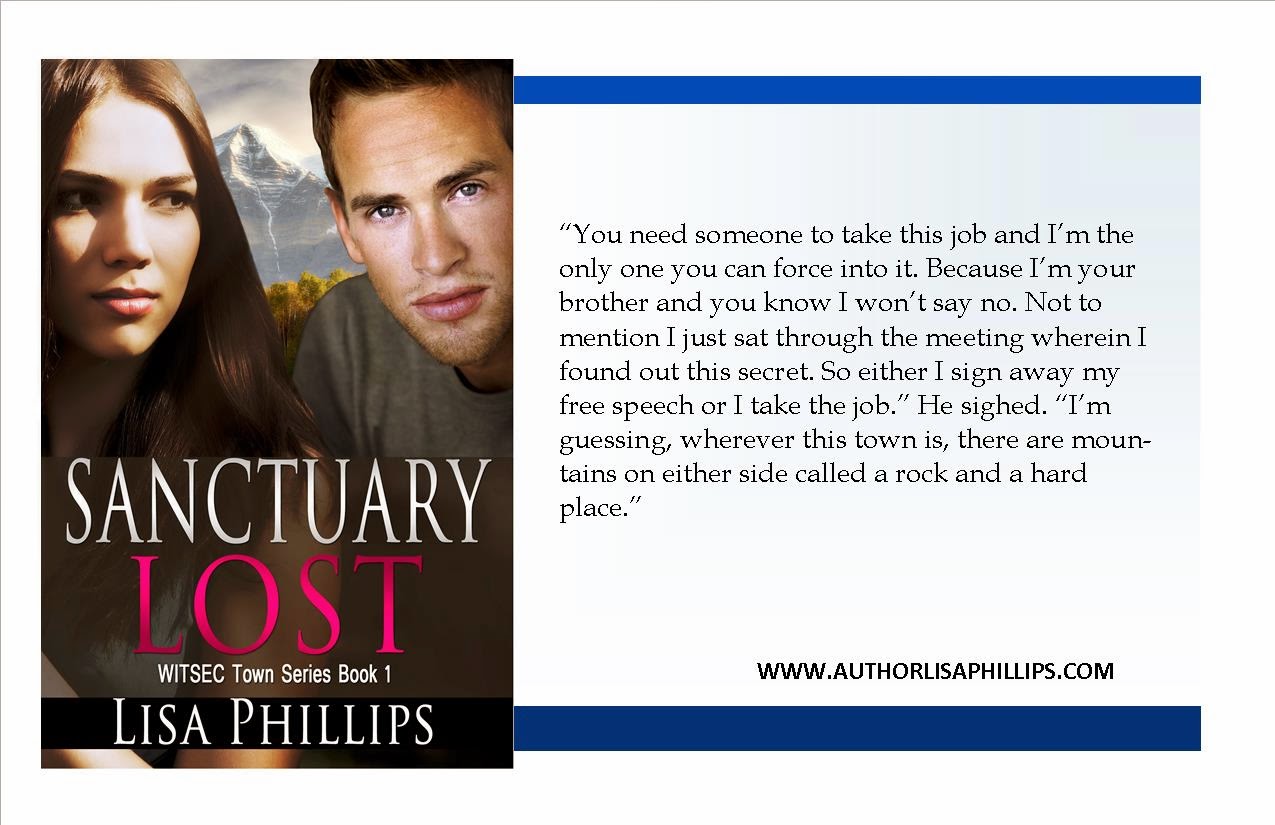 Simply enter your email in the comments
and you'll be in to win!
(Please specify if you're a Kindle or Nook customer)
p.s. if you're related to me by blood or marriage you are NOT eligible. So don't even bother. 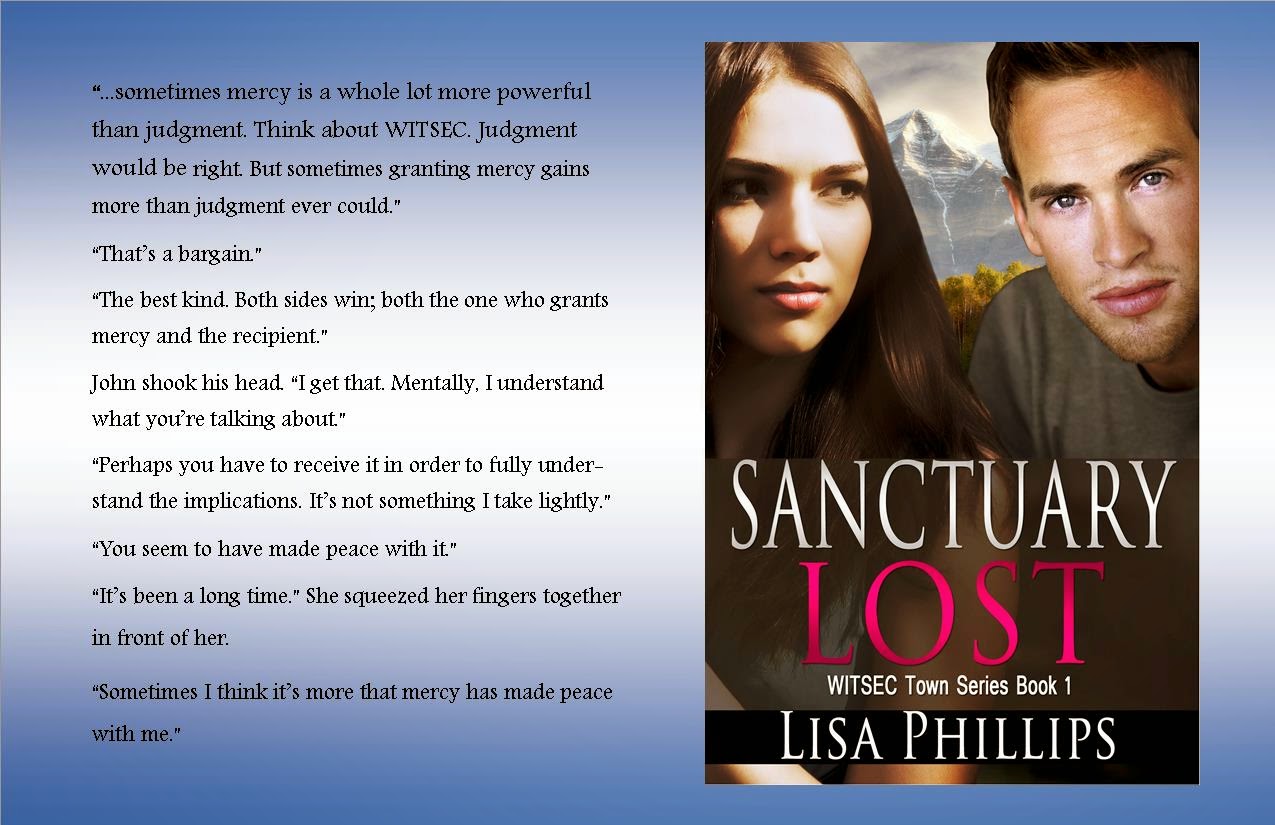 Sanctuary Lost is available now on

as well as on iBooks and in paperback
Posted by Lisa P at 11:25 AM 9 comments: 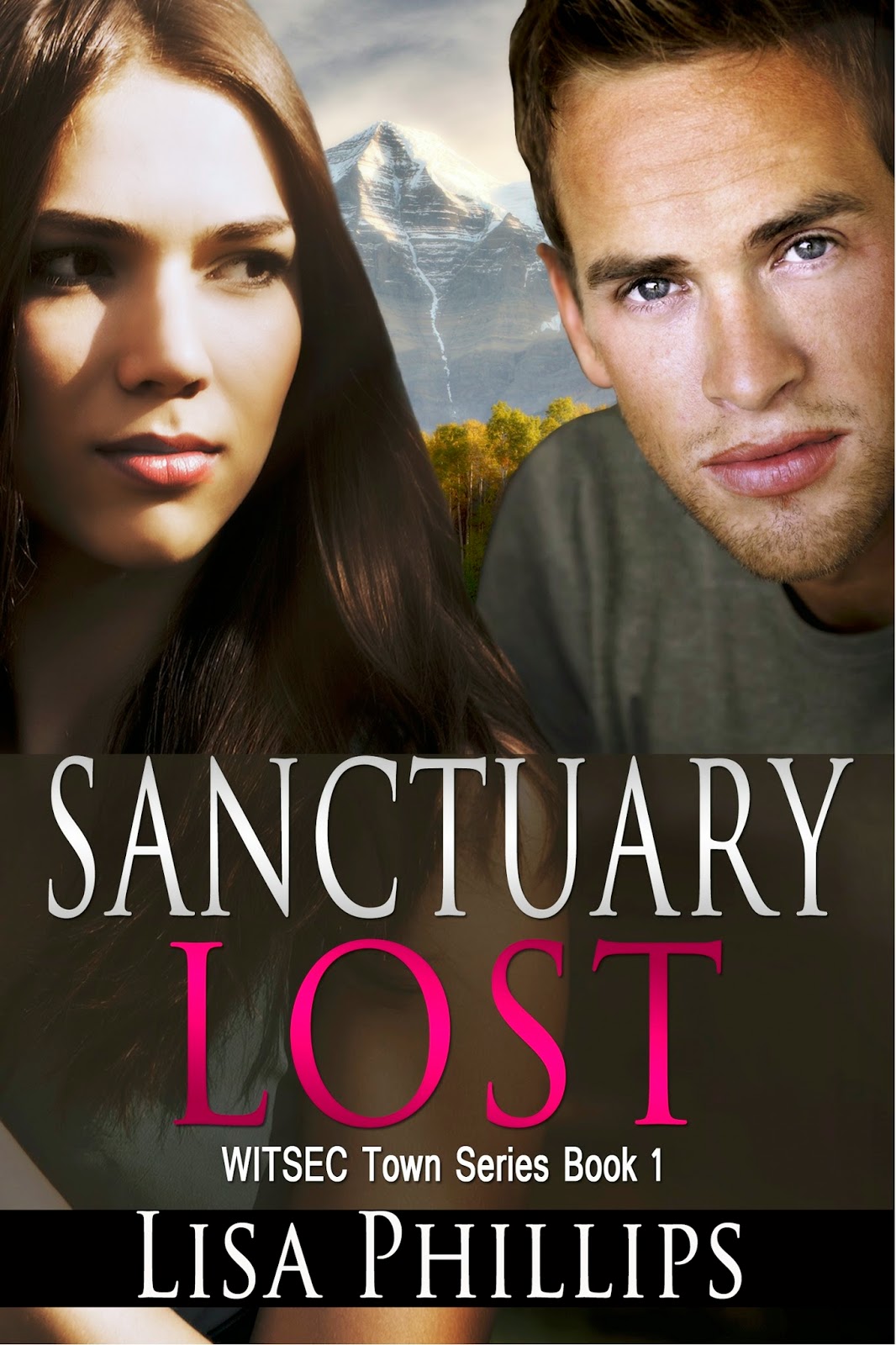 The key stuck in the lock. John muscled open the front door of his apartment and dumped his duffel bag on the entryway floor. The place smelled like bleach bathroom cleaner and the surfaces were free of dust. John found the patio door key and opened it, trying to air out the place. His mom must have come by or hired someone to clean.
Everything was just as he’d left it twelve months and three days ago—when his son had been seven. Now Pat was eight but it wasn’t long enough he’d have forgotten who his father was. Given time, they could reconnect. If Ellen let him.
John sank onto the couch and kicked away his boots. He gritted his teeth and stripped off the scrubs top the hospital had given him after they cut his shirt away.
Dawn crept across the dining area between the vertical blinds, but he didn’t sleep. Alphonz might be in custody but John didn’t feel any of the satisfaction which should’ve been there.
The satisfaction he’d felt with other undercover assignments.
By the TV he hadn’t watched in a year was a framed picture of him and Pat when his son was about four. Pat was on his hip and they were smiling at each other, his tiny hands touching John’s face.
John fell asleep with the feel of Pat’s hands on his cheeks.

He didn’t knock on his mom’s door. John grabbed the hide-a-key from the crack in the siding and let himself in. “Mom, it’s me.”
It was Grant who strode from the living room, his hair still more brown than gray even though he was pushing forty-seven. “She’s at bingo.”
“She left?” John ran a hand through his already disheveled hair. He needed to get it cut.
“Pat promised her he was fine. He’s stubborn, like someone else I know.”
“Where is Pat?”
The little man stepped into the hall, which was lined with cardboard boxes. Pat’s stuff? John zeroed in on his son’s face—a mini version of his own but with Ellen’s nose before she had it fixed. Pat looked at his feet, rubbing one shoe against the toe of the other.
“Pat?”
His son looked up.
John bit his lip. “Hey, kid.”
Grant frowned. John’s brother and his wife had three girls—now teenagers—so he might think he was the expert on parenting, but Grant had never understood the bond between father and son. At least, John hoped they still had one. Maybe he’d killed it.
He rubbed his chest, right above his heart. Pat’s eyes were wide but he didn’t look angry or upset. That was good, right? John sank to his knees in the foyer, ignoring the pain in his shoulder. He rubbed his forehead, his fingers scratching at the bandage. Right. His head. He’d forgotten about that.
“Dad?” Pat’s voice shook.
John lowered his hand. “I’m okay.”
He tilted his head and motioned Pat over. Okay, that hurt. Thankfully Pat didn’t hesitate, so John didn’t have to suffer Grant watching him fail as a father for the seven-billionth time. It was bad enough without an audience.
Pat’s steps gathered speed as he crossed the foyer. John opened his arms and Pat hit him at a full tackle, knocking John onto his backside. He wrapped his arms around his eight-year-old son and held him for the first time in a year. The assignment wasn’t supposed to have taken this much time, but he’d known going in it would be as long as it took to complete the job.
“I’m sorry.”
Pat’s body jerked. “You don’t want me to live with you?”
“Buddy—”
“I can stay here with Grandma. It’ll be fine.”
John touched his cheeks, the same way Pat had done with him in the picture. “Listen to me now. I’m not going anywhere, not anymore.”
He hoped Grant heard him, just as much as Pat. Because John didn’t want any more assignments.
And if his brother didn’t like it, he was going to quit.


This book is available now! AMAZON     BARNES AND NOBLE   and iBooks, in ebook and paperback.
Posted by Lisa P at 7:04 AM No comments: 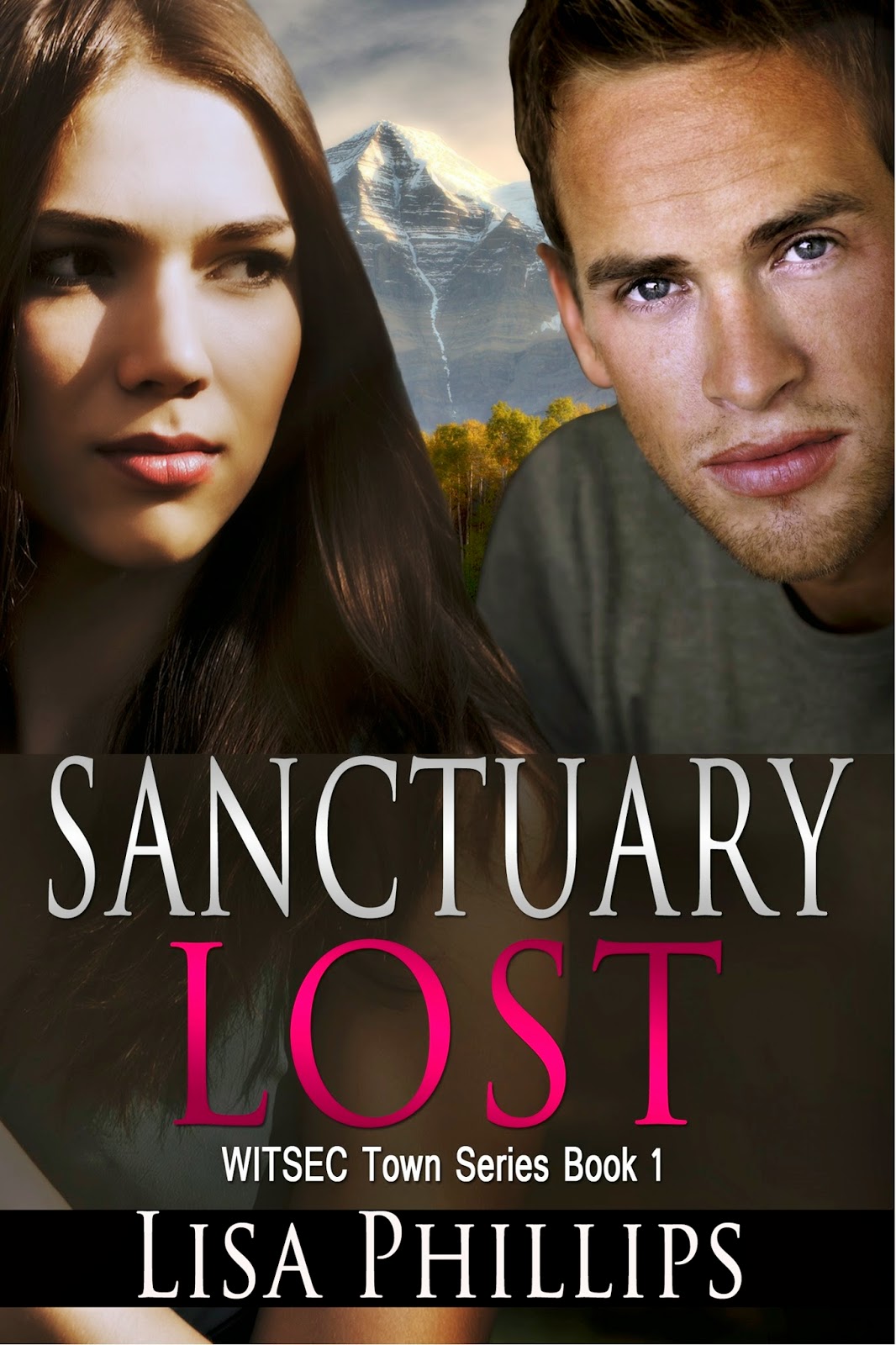 MAJOR thanks goes to the lovely Kristine McCord who is my cover designer. Her business website is up! Here it is: http://www.blueazaleadesigns.com/

Here's the blurb for Sanctuary Lost:
U.S. Marshal John Mason gains full custody of his son and is transferred to Sanctuary, a WITSEC town that isn't on any map.
When the town's first ever murder occurs, John's plans to reconnect with his boy are derailed by the investigation.
Andra Caleri gave up her old life a long time ago, but someone wants her out of Sanctuary--to pay.
As accusations fly and John uncovers a conspiracy that stretches all the way to Washington, Andra's past comes back in a true test of the mercy she received. Can John give up what he wants the most to bring the truth to light?
It's available now for pre-order on iTunes and Barnes and Noble for Nook customers, and goes on sale officially on June 30th!
Posted by Lisa P at 8:26 AM No comments:

My book has a trailer!! 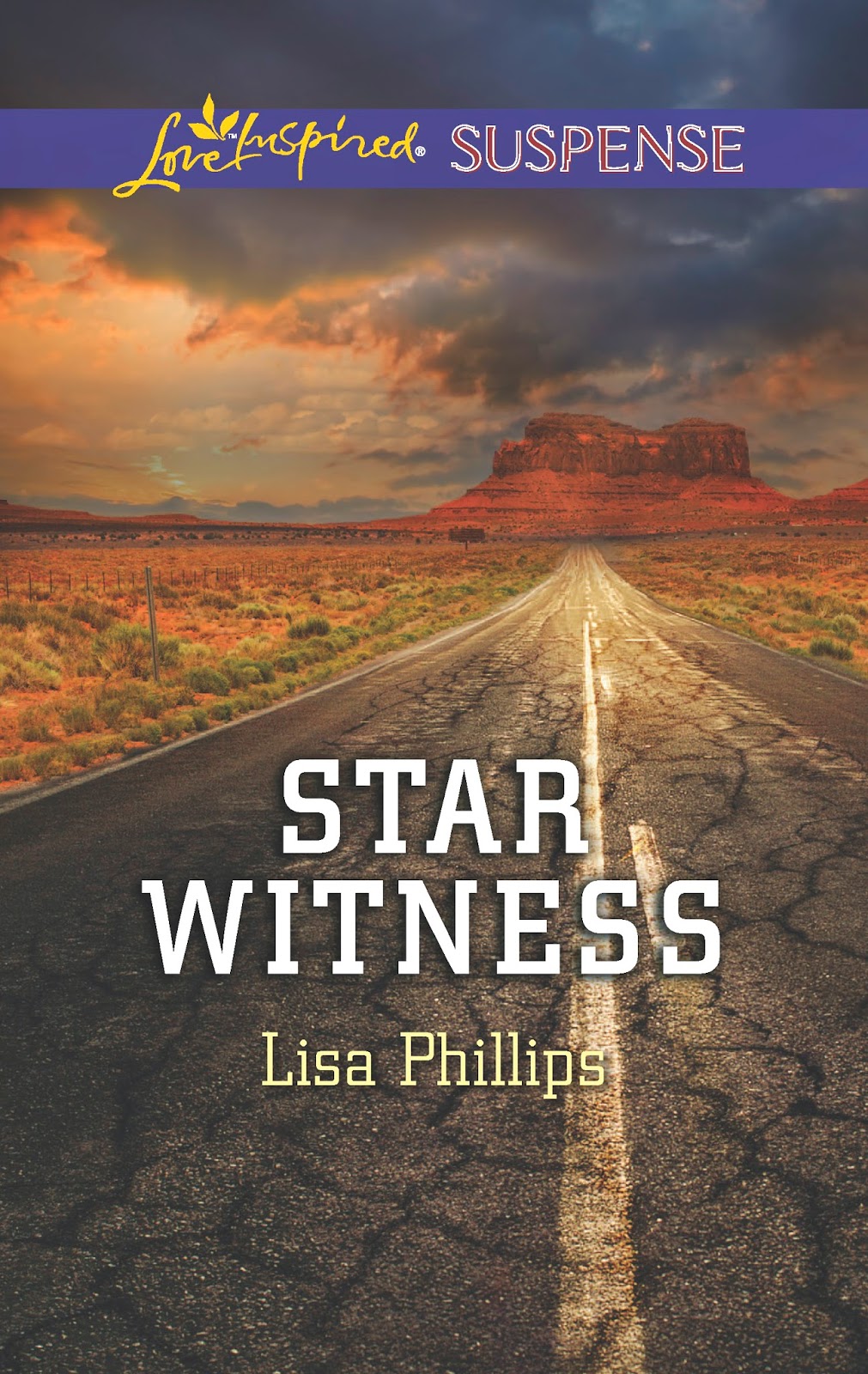 I LOVE how the road is cracked, and the sky is gorgeous. I'm kinda geeking out right now!

SHE THOUGHT SHE WAS SAFE
Mackenzie Winters spent years building a life in Witness Protection, but when someone shoots at her, she fears her cover has been blown. Could the brother of the drug lord she put away be here for revenge? Mackenzie must rely on her handler's twin, world-weary Delta Force soldier Aaron Hanning, to protect her. Aaron doesn't want to be anyone's hero, but he can't let this brave woman die. Now, with danger stalking them, they'll have to make a daring choice that means life or death—for them both.

It's available now for pre-order on Amazon, and Barnes and Noble
Posted by Lisa P at 8:40 AM 5 comments: